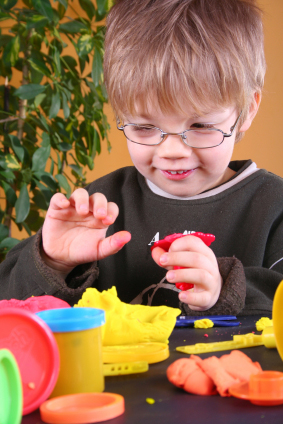 All teachers need to develop skills as observers. They need to see and record as accurately and as objectively as possible what is happening in different situations. Teachers learn most about children by studying their behaviour directly. By learning to observe with objectivity, to make careful notes, and to go over the notes thoughtfully, a teacher increases his/her understanding of a child’s behaviour. Systematic observations made by sensitive and knowledgeable educators are more powerful than any other technique in determining a child’s strengths and needs. Knowing what to observe and consistently recording the information for later reference as critical to good observation. Observations can be done unobtrusively in the child’s classroom setting as s/he interacts with teachers, plays, and participates in regular transitions such as meal times. At other times, situations may have to be contrived to provide information about specific behaviours. What is being observed determines whether the observation can be natural or contrived. We observe children to determine their level of interest in, and response to. the environment, their ability to solve problems, communication skills, motor functioning, and social skills.

Key to all observation techniques is a clear set of definitions regarding what is being observed. For example, if tantrums are to be observed, what constitutes a tantrum must be specified. What does a tantrum look like? How will you know it is occurring? Does a tantrum involve whining, turning away, crying, hitting, throwing things, refusing attempts to comfort, or some combination of all these things? Prior to the observation, the categories and their definitions must be developed, and all those using the observational instrument must be trained and skilled in its use.

There are a number of things to consider when making your observations:

Several strategies are used to structure information gathered during observations. These may include event recording, time sampling, checklists, rating scales, and coded observations. Observations are best performed in a child’s natural setting such as their home or classroom and, if possible, by a person who is familiar with the child.

Issues and cautions to consider when using observational techniques include:

Event Recordings: These may be continuous, narrative records of the child’s behaviours and responses or a detailed recording of a single event. For example, behaviours such as temper tantrums may occur regularly. It is important to capture the details of the antecedent condition (what happens right before the tantrum occurs), the behaviour during the tantrum, and the consequent events (what happens immediately after the tantrum) in order to develop appropriate management and treatment plans.

Time Sampling: Often called interval recording, is used when behaviours occur more frequently and the observer is interested in the frequency of occurrence. To develop a more complete picture of a child’s behaviour you may decide to observe the child using a time sampling approach. Prior to the observation, you need to develop a form for recording observations and select the times you want to observe. Forms are usually quite simple and are typically divided into smaller intervals of 15 seconds to 1 minute. Behaviours may be preprinted on the form so that the observer can record what is occurring during each interval. The observation period may last from several minutes at different times throughout the day to an hour or more every day for several weeks. At the end of the observation period, the percentage of time that the child has spent displaying the behaviours of interest can be determined.

Checklists and Rating Scales: These can be used to determine the presence or absence of a particular skill or behaviour or to rate the quality of the behaviour or setting. Checklists of developmental milestones can be used. Children are observed at play to determine which skills they have mastered, which are emerging, and which remained to be learned.

How Often Are You Going to Record the Behaviour?

If a behaviour happens just a few times a day for shorter periods of time, you may wish to keep track of it throughout the day. If a behaviour happens frequently or for long periods of time, you may wish to pick specific times during the day when it typically happens. Count or time the behaviour only during these designated times. As a general rule, if the behaviour occurs more often than once in 15 minutes, you want to record only at specified times.

Behaviour is anything that a person says or does. It is any action that we can SEE or HEAR. Here are some examples of behaviour:

Behaviour also has a “function” or purpose. It can be a way to meet our needs, or to help us to communicate. Sometimes, when a person cannot communicate, they rely on behaviour to take the place of speaking. A child may use behaviour as a way to let you know:

What is meant by challenging behaviour?

Challenging behaviour can put the health and safety of a child, and those around him/her, at risk. It can also interfere with a child’s learning. Sometimes, behaviour is a challenge because it happens far too much, or not enough. It may take many forms, such as:

Before one can start changing a behaviour one has to define the behaviour that needs to change. This is important, especially if you are working with a team so that everyone is looking for the same thing. For example, Sara runs from the snack table and attempts to leave the classroom. This gives everyone an understanding of the challenging behavior. Once defined, you can move into assessing the function and how to create more appropriate behaviours.

Why do children engage in challenging behaviours?

As mentioned above, all behaviour happens for a reason. It is important to better understand why a child is behaving or acting in a certain way and to determine the function or purpose of the behaviour. Simply put, what does s/he “get” for behaving in this way?

Examples of the four functions of behaviour:

Antecedents, Behaviour, and Consequences, or the ABCs

Understanding and changing a child’s behaviour is never simple. Describing the behaviour of concern, and gathering relevant information about when it occurs and under what conditions are the first steps to achieve success.

Antecedent is something that comes before a behaviour, and it may trigger that behaviour.

Behaviour is anything an individual does.

Consequence is something that follows the behaviour.

The ABC Functional Assessment Card is a recording system that is extremely valuable in helping to gather and analyze information to help change behaviour. 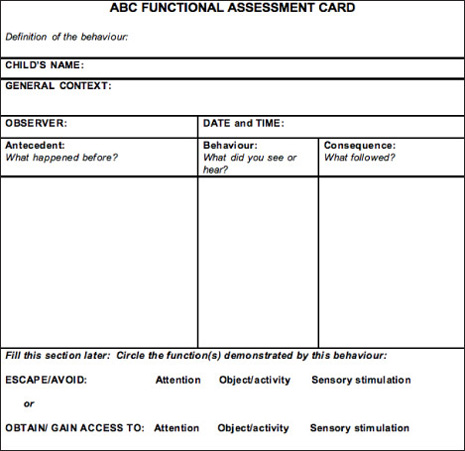 The first step is to carefully select and “define” a specific challenging behaviour. Defining a behaviour requires describing exactly what is seen and/or heard. The definition should be specific, observable, and measurable. It may be useful to print the definition of the behaviour right on the top of the ABC card.

The next step is to fill out a separate ABC Card each time the defined behaviour occurs.

Analysis of the ABCs:

It is important to look for any patterns or common trends, such as patterns in the days of the week, or times of the day when the challenging behaviour occurs. Note when the behaviour does not occur as this may give additional clues about contributing factors.

Questions to ask include: