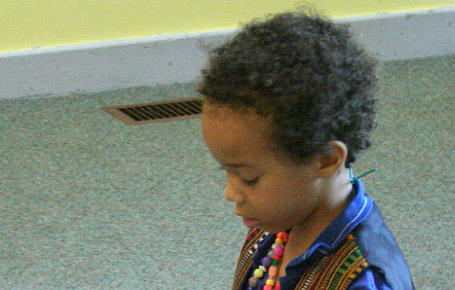 Hamzah is a three-year old boy in the preschool room. He usually speaks in one word phrases. At the end of circle time each child is asked to choose where he wants to play. When it is Hamzah’s turn he often does not respond and remains seated.

Does this story about Hamzah at play time sound familiar to you – perhaps you have a child like Hamzah in your classroom?

If so, then you’ve actually taken the first step of identifying a problem behaviour that may be putting a child at risk. In this case, Hamzah’s problem behaviour is also interfering with his social, emotional and intellectual development.

Deciding what to do next may be difficult. Here’s the 3-step approach we followed in Understanding and Changing Behaviour.

Step 1: Decide Where to Start

Let’s take a moment to describe what we see or hear. Describing the behaviour will help us to be consistent when gathering information a bit later.

When Hamzah is asked to select an activity or play area, he does not respond with words or gestures. If seated or standing he remains in position and does not move.

We have agreed to directly observe Hamzah’s behaviour and record our results using the ABC Functional Assessment Card. We’ll chart at least six times before reviewing the information. We will also use the Motivation Assessment Scale (MAS) by Durand and Crimmins to learn more about the possible reasons for the behaviour.

We’ll talk with Hamzah’s parents to find out if he has any difficulty playing, making choices or following directions at home.

Now let’s move on to the next step.

After speaking with Hamzah’s parents, we learned that he is an only child, and often plays on his own at home, or with his father. He follows instructions easily and enjoys listening to the radio, and children’s music.

Hamzah’s parents are very concerned about his language development as Hamzah uses mostly single words to speak and some gestures. A hearing test has been scheduled for Hamzah, and he is also on the waitlist for a speech and language assessment.

We completed the MAS and recorded our observations throughout the week using the ABC Functional Assessment Cards. After analyzing all the information we collected, here’s what we noticed about Hamzah’s behaviour:

According to our analysis of the information, the suggested function of Hamzah’s behaviour is to escape the choice making activity that follows circle time. This is possibly because he does not know how to respond to it.

Now it’s time to move onto the next step and plan for change. Planning for change involves making the behaviour irrelevant, inefficient and finally ineffective.

We can make the behaviour irrelevant by preventing or controlling the things in the environment that happen before the behaviour.

Let’s take a look at some ways to prevent the behaviour from happening by adapting routines, using visuals, making changes to the environment, and modifying teaching methods.

Routines
We can make a few changes to the circle time routine to help Hamzah understand when to transition to the next activity. Just like we have a “welcome “song at the beginning of circle time, we’ll also use a “goodbye” song to let everyone, including Hamzah, know that this activity is over.

Using Visuals
We can also make a visual schedule with pictures that shows the activities happening that day, the sequence of events, and when it is time to stop one activity and start another.

Environment
Since Hamzah is very interested in music, we are going to add objects that have a musical element to some of the learning centres around the room. For example, we’ll place a toy radio/tape recorder to the dramatic area, and collect some audio books to create a listening centre.

Modify Teaching Methods
After reviewing our observations, we realized that we can change the way we give instructions or directions. We can get down to the child’s level, make eye contact, and simplify our speech. Instead of saying “where do you want to play?” we can say “want blocks or tape recorder?” Using pictures of these objects will also help Hamzah understand what we are saying. To start, we’ll present Hamzah with a choice between real objects.

To make behaviour inefficient, we might choose to teach specific adaptive, educational and social behaviours. By teaching these types of behaviours, we eliminate the need for the problem behaviour.

At other times, we may teach an alternative behaviour. An alternative behaviour serves the same function as the behaviour being replaced but is seen to be more appropriate by other children, adults and the general public. To be successful, it requires equal or less physical effort and complexity but results in the same type of pay-off for the child.

Remember how we observed that Hamzah engaged in problem behaviour following circle time. We’re going to teach Hamzah how to make a choice by using concrete objects and eventually with picture symbols. This will also help to expand Hamzah’s play skills, and build on his expressive language skills.

For specific details on the strategies and other teaching techniques we used to teach Hamzah to “make a choice” visit our “Teaching New Skills” section.

The last step is to make problem behaviour ineffective, meaning that it no longer works for the child. We know that problem behaviour often increases before it decreases when implementing changes. The key is to be consistent with our plan.

Everyone on the teaching team will be sure to use the objects that represent the various learning centres to help Hamzah select an area to play in (e.g., blocks, playdough container, crayon, book). We will also be sure to help Hamzah follow through with the choice by walking him to the selected learning centre and praise him for choosing an activity.

Next we need to look at changing the behaviour in every environment in which Hamzah finds himself. We will talk with Hamzah’s parents about using the same strategies at home. Our partnership with parents is the key to success!

If the problem behaviour persists then we will have to re-assess but it is important for us to give our plan time to work. Be patient! Some behaviours can take a couple of weeks to change.